…EXPECTED TO STRENGTHEN DURING THE NEXT FEW DAYS…

Tropical Storm Leslie is heading straight towards us, according to today’s report from the National Hurricane Centre.  We’re in the stunning Quinta do Lorde Marina, Madeira Island and the storm is currently churning away just west of us with predictions that it’s heading our way later this week.  Deep rumbling thunder, lightning and heavy rain is raging outside; we’re glued to the weather reports and repairing window seal leaks.

Whilst cursing ourselves for the windows we forgot to shut, we’re very pleased to be cosied up in a safe marina, plugged into the electric and stocked up with food. We’re moored under a dramatic basalt cliff face and it feels very different to anywhere we’ve been before.

The view from Baggy in the marina

Our marina viewed from the cliff … nice!

August to October is peak hurricane season, which is why we’ve timed our big Atlantic crossing for late November. Leslie’s mid-Atlantic antics are therefore worrying.  She’s expected to strengthen over the next few days with marina gossip of tropical-storm-force winds gusting 85 knots extending outward up to 230 miles (370 km) from its centre.

The marina staff here are confident it won’t hit us full on and they seem to know what they are talking about.  But we can’t stop checking the latest reports. We were hoping to set off for the Canary Islands on Saturday 13 October, but it’s looks like this might have to be delayed to Monday 15 October so the winds have time to calm down.  Problem is, our friend Phil is joining us for the crossing on Thursday 11 October, and his flight back to the UK leaves Tenerife on Thursday 18 October.  We’re now worried he might not make it.

We left Cascais, Portugal on Saturday 29 September with the company of highly experienced sailors Chris White (Whitey) and Annie O’Sullivan (Sully). Chris and Annie had flown in the night before with emergency supplies of port and starboard elephant bog roll (kitchen towel), Yorkshire teabags and my favourite beer!  (And a Crystal Collagen Gold Hyaluronic, Anti Aging, Anti Wrinkle, Hydrating, Balancing,
Blemish Clearing Face Mask … as used by Hollywood Stars … thanks a million Annie!)

Our destination was the Madeira Islands, an archipelago in the North Atlantic; once known as the place for ‘newly weds and nearly deads’, but apparently now enjoying a tourism renaissance.

We slipped our lines in baking heat, dressed in shorts and in a relaxed and happy frame of mind till we hit the open sea and a westerly force six took us by surprise and my ‘putting in a reef’ practise with Annie became a very wet, cold, all hands on deck situation.

But, drama soon over, we settled into a routine of Paul, Chris and Annie each taking a two hour watch on and four hour watch off. I spent an hour with each person between the watches in a bid to keep people awake, put the kettle, pass round the snacks and pick up top sailing tips along the way.

We made great progress covering 120 miles in the first 24 hours and were poled out with a north/north easterly wind for the entire 519 nautical miles.  Mowgli (the self-steering wind vane) took away the need to helm and the hours melted away mostly watching dolphins, deciding who was going to cook dinner and wash up, sleeping, chatting, reading and musing over the bigger meaning of life stuff … like what to have for dinner!

So, without further ado, these are the dinners we had on board …

On night watches we visited a magical land.  Baggy gently sailed along under a sparkling black dome of stars and a large mysterious smudge of milky way. A butter coloured moon cast a warm glow on the thick inky sea which plunged to over 5000 metres deep in part.  Small white waves bubbled around us in a dazzling diamante phosphorescence and dolphins followed us like phantom spirits leaving just a sparkling underwater spectre trail in their wake.

Aside from the occasional satellite, plane or distant vessel we saw nothing that was made or affected by mankind.  It was wild nature at its most pristine.  Baggy seemed to sail as quietly as she could and we all talked in hushed voices, using just the red lights on our head torches to keep our night vision.  We were guests on the night ocean and didn’t want to do anything that disturbed its serenity.

And then Harvey arrived … 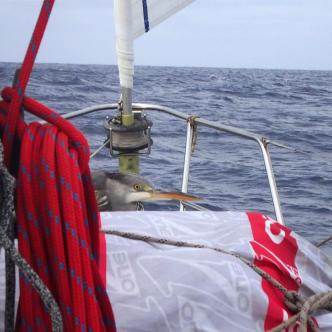 Harvey in his base camp

Harvey keeps a look out for his mates

At 3am on the second night watch we were circled by what looked like a jet black pterodactyl.  This huge flying creature, silhouetted by the moon, was around 150 miles away from the nearest land.  It flew around the boat in every closer concentric circles before making crash landing attempts on the rigging and guard rails. We quickly shut the hatch. If this thing had landed in the saloon it would have been a disaster!

We sat still, protected our heads and willed this giant creature to land on the foredeck. And eventually ‘Harvey’ joined our crew and set up his camp on the foredeck, tucked up behind the dinghy.

When day broke we peered at him and he peered at us. We had been joined by a large, leggy juvenile grey heron. We fed him sardines by throwing them in front of him through the hatch windows. He dozed and gently rocked with the motion of the boat and we soon became accustomed to each other’s company.

Harvey stayed with his for exactly 12 hours and at 3pm the next day something miraculous happened. He called out, launched himself into the air and flew towards a flock of birds in the far distance.  We wondered if he would reach them, or if they would notice him, but the flock started flying in circles and Harvey joined them. They then turned and six herons flew back towards us.

I remembered that a flock of herons is called a siege! For one brief, disturbing moment, I thought they were ALL going to try and land and hitch a ride to Madeira.  We simply didn’t have enough sardines on board for everyone!

Mercifully they just flew over as if to say thank you.

Had Harvey lost his way? Had his friends and family been trying to find him?  Was it pure coincidence they found each other?  We’ll never know … but herons do migrate south and we’re very pleased to have helped Harvey on his journey.

1 Successfully hoisting our colourful cruising chute for the first time on the last leg of the journey from Porto Santo! 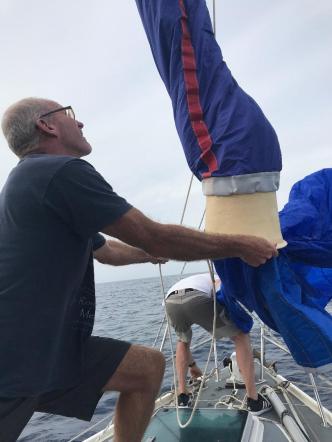 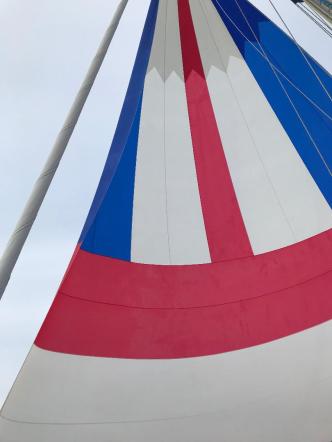 Cruising chute in all its glory 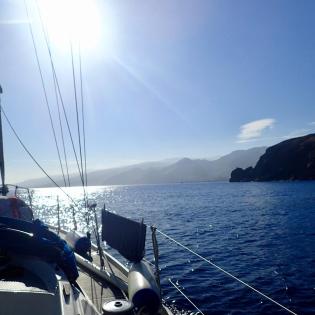 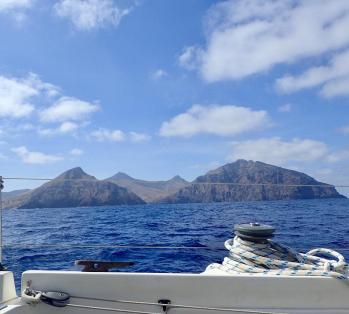 A new land to be explored

3  Anchoring off the small island of Porto Santo for an ‘arrival’ sea swim in crystal clear water MUCH warmer than in Spain! 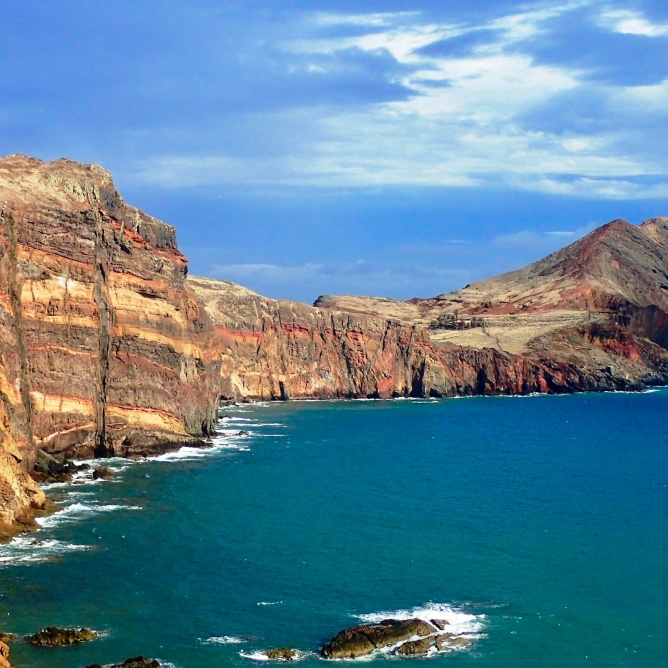 5  Large flocks of gorgeous yellow Atlantic Canaries (which move too fast for photos!)

6  A white knuckle bus ride from the marina to Funchal with steep mountainous drops, and hair pin bends at ridiculous speeds. Not helped by sitting at the back of the bus and it being my first time in a moving vehicle since leaving the UK in JULY … eight weeks ago!

Wistful mermaid … by the door! 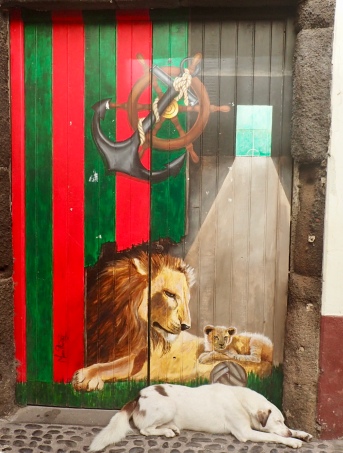 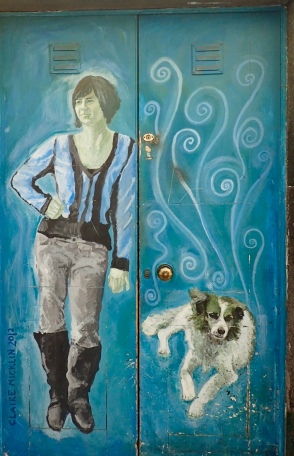 8 A cable car ride over Funchal looking out over small banana plantations, buildings and the bay

Riding the Funchal cable car (from left to right) Annie, Sally and Chris!

Whose world is it?

If we can avoid bumping into stroppy Leslie we should have a fast, two-day ocean passage across to the Canary Islands with our friend Phil Luckins.  We plan to spend two weeks there with visits to North Tenerife, La Palma, La Gomera and South Tenerife.  We’re then being joined by Paul’s older brother Mark who is going to help us sail an epic 800 nautical miles to the Cape Verde Islands – our longest ocean passage yet.

Since starting this blog the National Hurricane Centre has published another update …. Tropical Storm Lesley has detoured to the north and we’re on the very fringe of any possible hit … on your way Leslie, on your way old girl.

See you all on the Canary side! 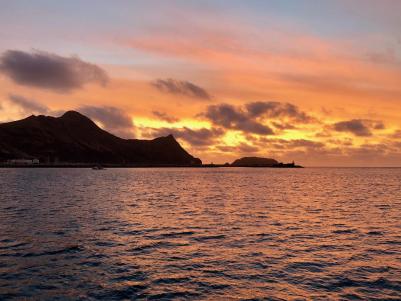 6 thoughts on “Tropical storm warning and an unexpected visitor”