We had clung onto the cushions in the aft cabin and wedged ourselves with our feet to try and stop the incessant rocking.  Nothing helped, we didn’t sleep a wink. We were at anchor in Cascais, the resort town outside of Lisbon and the boat had rocked all night. To make matters worse breakfast had consisted of omelette and chocolate bread (it looked like rye bread),  Paul’s UHT milk had gone off, we had nearly run out of water and Paul had just been bitten by a small trigger fish. It was time to move to the marina.

It’s day 47 of our round the world adventure and we have already sailed 1100 miles since leaving Gosport.

A few stats from our trip so far ….

The sail from Baiona, Spain to our last stop in Portugal has flown by.  A combination of fog, suspected post tropical storm surge, temperamental wind and an urgency to get to Cascais meant we couldn’t stay for too long in one place. There were no sea swims, no diving or snorkelling and no hikes up mountains. We were on a mission.

Old Crook Nose Dolphin
It’s been frustrating to pass by beautiful, unexplored places.  BUT we saw A LOT of dolphins and (ahum) managed to eat A LOT of Pastel de Natas (Portuguese egg tarts dusted with cinnamon).  In fact, we’ve enjoyed eating quite a lot.

Our passage from Baiona to Cascais

We left Spain on 17 September and hit cold, wet, pea soup fog as soon as we got out to sea. The pilot book said it was a ‘featureless coast line’, but this was ridiculous. All the way to Varzim, Portugal we had nothing but fog … for 52 foggy miles. 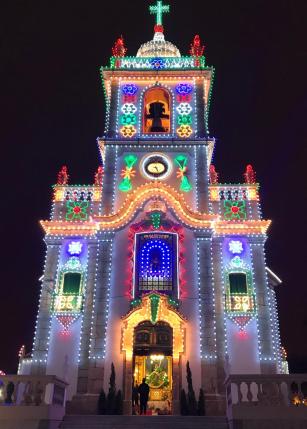 Not your average church in Varzim
Camera at the ready I was SO looking forward to crossing from Spanish to Portuguese waters  … but we couldn’t see anything except the boat, grey sea and sky … so a cheesy grin from the Captain hoisting a new country flag had to do!

It was tiring motoring through fog looking out for fishing boats without AIS.  They would suddenly loom up out of nowhere. As would the ‘surprise’ lobster pots. But we had our daily dose of happy dolphins and the chance to do a few boat jobs on deck.

Ten hours later we moored up in a marina in Varzim, tired and in need of a good nights sleep.  But sods law – we had a ROUGH night.

Suspected surge left over from Tropical Storm Helene was causing the boat to swing violently into the skinny pontoon (which was too small for the boat and also swinging).  In fact the whole marina was on the move. Our electric cable got pinched and damaged; Baggy bumped her bow; things fell off the walls and we thought the fenders were going to pop. We now have a repaired electric cable and a bow fender!

One night was quite enough.  We had a run round town to pick up a few supermarket essentials, watched in awe at the HUGE Atlantic breakers on the beach and headed off back out to sea and down the coast to Leixoes.

The entrance into Porto Leixoes

Leixoes reflections
We had yet more fog and were pleased to arrive in its sheltered anchorage alongside the company of many other cruisers we were starting to recognise. It’s a big working port so it was bizarre to be getting ready for bed and watching a stream of gigantic cargo ships casually cruise past your cabin window.  And my bid to take a touristy photo was quickly thwarted by the Captain who said my flash could be mistaken for a navigation light … !

Aviero harbour entrance
Our next stop was Aviero, we had a clear sunny day with great sailing for 37 miles and anchored by an airforce military camp … so it was no surprise to be woken up by a loud and enthusiastic, stand by your beds, bugle call the next morning .. !!  But getting out of Aviero was tricky.  We’d timed our arrival at the harbour entrance just as the tide turned in our favour but had to negotiate over fifty small, over excited, local fishing boats – catching what looked like Sea Bass and driving their boats like lunatics to get into the best position.

Just fishing .. no figs in sight
Next stop – Figuira da Foz (meaning fig tree at the mouth of the river).  We didn’t see another vessel all day as we sailed along in the sunshine then noticed some type of maritime enforcement boat heading urgently towards us.  I was alone on deck and Paul was below … it slowed down, make a u-turn and checked us out.  They noted the name of the boat, didn’t say anything to us and left … which was a bit disconcerting. 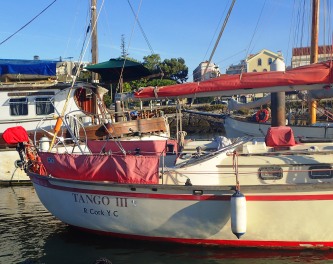 Ireland on one side

Swiss Japanese on the other side
The next two nights we treated ourselves to a cosmopolitan marina … with a yacht from the Royal Cork Yacht Club on one side of us, a Swiss Japanese boat on the other and a Belgian boat behind .. !  We ran around the lovely town and visited Portugal’s largest beach Rainha das Praias ‘the queen of beaches’ – which was 3km long with scary unswimmable waves. And we bought incredibly cheap fresh supplies from the local market, and enjoyed some banter with the lovely Portuguese old ladies!

The next morning we were privileged to see a rare fog bow, sometimes called a ‘white rainbow’ as we set off for our penultimate Portuguese destination – Nazare.

That day started in full foulies, three layers and boots (the Captain kept his shorts on) and ended up barefoot and in a bikini (not the Captain!)  We poled out the genoa and covered 38 nautical miles. After a stroll round the town and seeing their very impressive Blue Flag beach we were off out to sea again to Peniche.  But not before a VERY tight negotiation out of the marina which took a lot of planning, a lot of fendering and it was a small miracle that we (and the boats around us) escaped unscathed .. !

Entering Cascais harbour
We had a final fast, exciting sail to Cascais which built up to 25 knots.  We covered over 44 nautical miles and nine hours later we had arrived into a bustling hot bay rammed with beaches, busy bars and restaurants.  And it was very hot – 31 degrees! 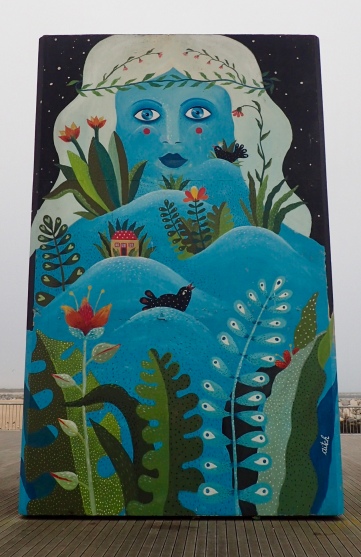 3 Book swops – finding our first book and DVD swop .. then both reading the book we had got in two days (it was ‘The Dinner’ by Herman Koch)

4  Beer beans – salted lupini beans (or tremoços).  These were an exciting new discovery  … sold in the markets and apparently made by old ladies at home!  FACT: They apparently help lower your blood pressure, cholesterol and blood sugar levels!  You can’t eat them elegantly.  The old ladies of the market reliably informed us you’re supposed to bite the edge of the bean in your mouth so the inner seed pops out and the waxy outer shell is ‘delicately’ discarded (spat out) .. !  Spit buckets were provided around the market. 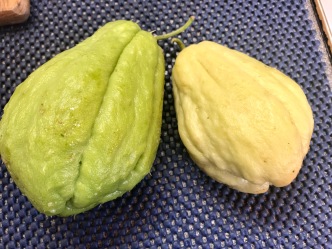 5 Finding a new vegetable – we were sold some strange vegetables by a cute old lady in the Figueira da Foz market.  Thanks to Kate Mercy who identified them as cheyote squash (though I nearly poisoned myself eating some of the skin, only to find out it’s an irritant).  We stir fried them in chilli 😉 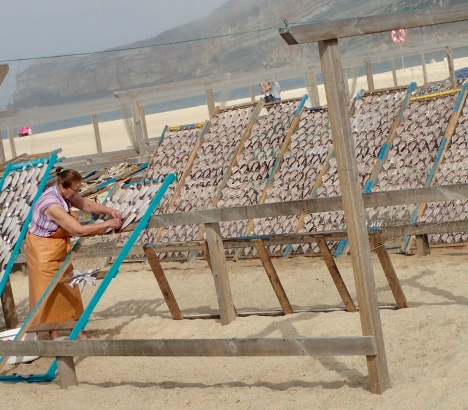 7 Meeting Marta – the Portuguese rep on the Sail Training International youth council – we literally bumped into her while checking into Cascais marina. Small world.

The predicted northerly winds look great for a possible four day ocean passage across to Madeira with the lovely company of Chris White and Annie O’Sullivan who are joining us as honorary Bagheteers for a week.  We’ll have just a four day break there before being joined by our next Bagheteer Phil Luckins to help us sail across to the Canary Islands. We’re hoping for a fast and smooth passage.

PS.   Remember I lost my favourite flip flops? Paul bought me some new one’s – they’re made out of cork and they float 😉

3 thoughts on “Flying through Portugal and our eight best bits”