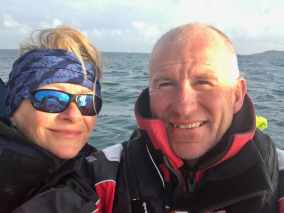 Yacht Bagheera (known to all her friends as Baggy)

Bagheera was built in Waterlooville, Hampshire in 1979, making her a frisky 40 year old next year (2019).  She’s a Westerly Conway – a long fin keeled, medium displacement sloop; 10.91 metres long, 3.35 metres wide, 7 tonnes displacement. She has a Hydrovane self steering system, which enables the boat to self steer a course relative to the wind and requires no power, or cups of tea! With two heads, a fore and aft cabin, pull out sofa and navigators berth she could sleep eight people at a push – but four comfortably.

To the best of our knowledge she’s had three previous owners and completed at least one Transatlantic circuit.

She was designed by the famous naval architect Laurent Giles. An example of his work is Wanderer III, the 30’ sloop in which Eric and Susan Hiscock circumnavigated and whose book Around the World in Wanderer III has helped inspire our voyage.  The Laurent Giles design philosophy is that a yacht should have ‘the utmost docility and sureness of manoeuvring at sea, in good or bad weather’.  His boats were designed to maintain a steady course with minimal action by the helmsman, but respond instantly to the helm if the need arose.

Bagheera’s hull shape certainly gives her a sea kindly motion and she is well suited to ocean voyaging. 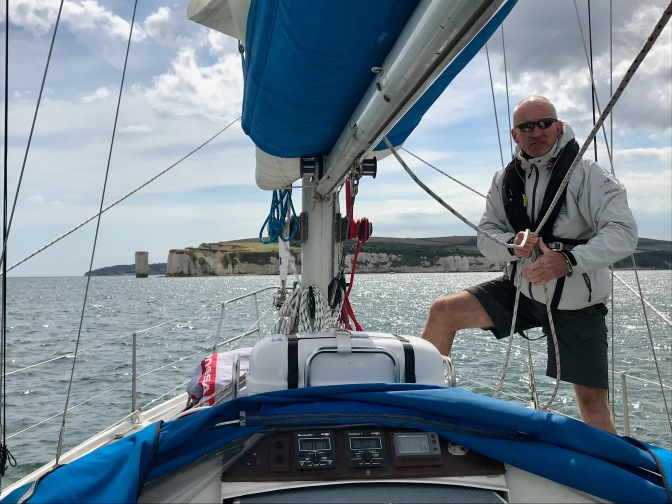 My interest in sailing started while messing about in a mirror dingy as a Sea Scout. I got my first taste of offshore sailing in 1982 as a trainee on a cross-channel, six-day voyage with the London Sailing project. I was selected to sail on The Tall Ships Races 1984, across the Atlantic from Gran Canaria to Bermuda and subsequently progressed through the volunteer ranks to become a skipper. I’ve sailed with the London Sailing Project (now Rona Sailing Project) every year since 1982, making life-long friends, some of who are joining us on different legs of our adventure.

In 1995 I started working for Chay Blyth’s Challenge Business, which organised the Global Challenge around the world yacht race, and it was then I started thinking about having an adventure of my own ….. more than twenty three years later it’s hard to believe that long held ambition is coming true.

I’m never happier than when I’m on or in the sea (I‘m a Pisces), but I was introduced to sailing pretty late on in life.  My passion has always been in scuba diving, thanks to Cambridge British Sub Aqua Club who trained me up to become an Advanced Diver. It’s fostered in me a huge respect for the ocean and the need to look after it. I’m proud to have stacked 500 dives under my weight belt – the majority of them in challenging, cold, UK waters!  Handy if someone is needed to clean the hull, cut a rope off the prop or some other dirty ‘under the boat’ job.

My formal sailing qualifications amount to having completed the RYA Dinghy sailing course! Saying that I’ve had the privilege of sailing on some wonderful Tall Ships as part of my former job as Director of Marketing and Communications with Sail Training International.  I’ve sailed on Tall Ships Tenacious and Stavros in The Solent, Maybe from Finland to Latvia and Gulden Leeuw from France to Italy.

Paul and I have sailed together as much as possible. I’ve sailed on a Moody 35 Lady Shona around the south coast and on a Malo 40 Tangent across the Channel to Cherbourg and back.  We sailed Baggy from Suffolk Yacht Harbour to her first home in Wicor Marine in Portchester and then took every opportunity to sail to the Isle of Wight and across to the Channel Islands.

In the words of R.M. Ballantyne in The Coral Island, “Roving has always been, and still is, my ruling passion, the joy of my heart, the very sunshine of my existence.”  In past lives I’ve worked on Kibbutzim and Moshavim in Israel, back packed across Egypt and worked as the PR Officer for Raleigh International on their Zimbabwe Expedition.  I always knew there was another big adventure inside of me … and this is it.