A wild haired, bare chested man leapt out of a jungle hut brandishing a sharp machete.

With two deft strikes a whole banana tree came crashing down with a HUGE bunch of green eating bananas. 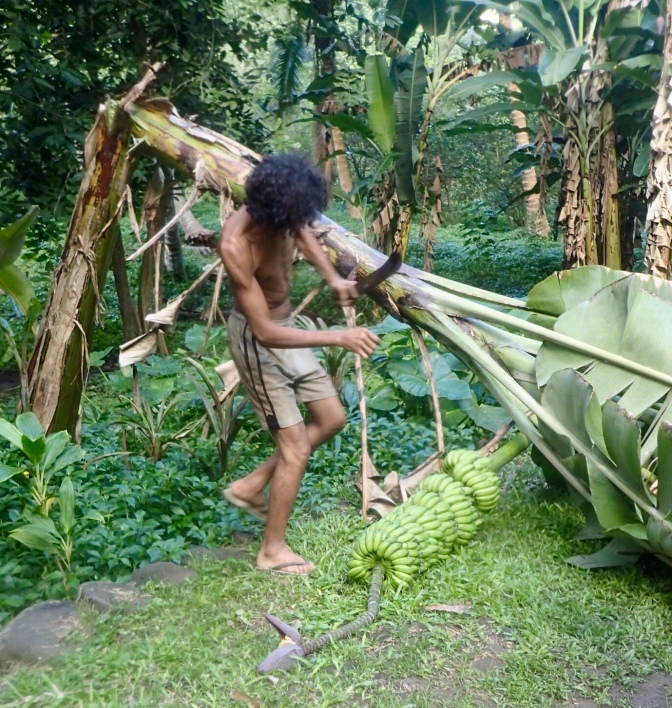 He then bounded off to cut down another tree and returned with a bunch of green plantains. Two types, he explained in French.

The total cost was £3.50. And it was our first lesson in food shopping Marquesas-style!

The whole event seemed quite barbaric and left us guilty and stunned. We later learnt that a banana tree doesn’t yield fruit twice. It simply grows back within a fortnight and is ready to yield more fruit a year later.

The wild man had a lot of banana trees and it was great to go out and ‘pick bananas’ from the back of the boat. 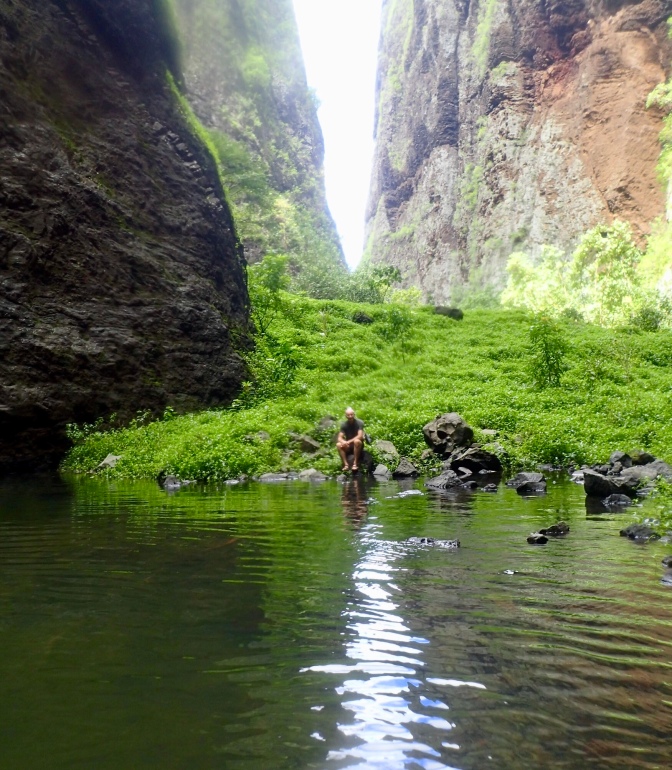 The Marquesas were famously painted by Paul Gauguin who lived there; visited and written about by Thor Heyerdahl in Fatu-Hiva and many of the plants were inspiration for the film animation in Avatar.

They are islands of stark contrasts.

Steep, rugged and menacing when shrouded in heavy rain clouds. 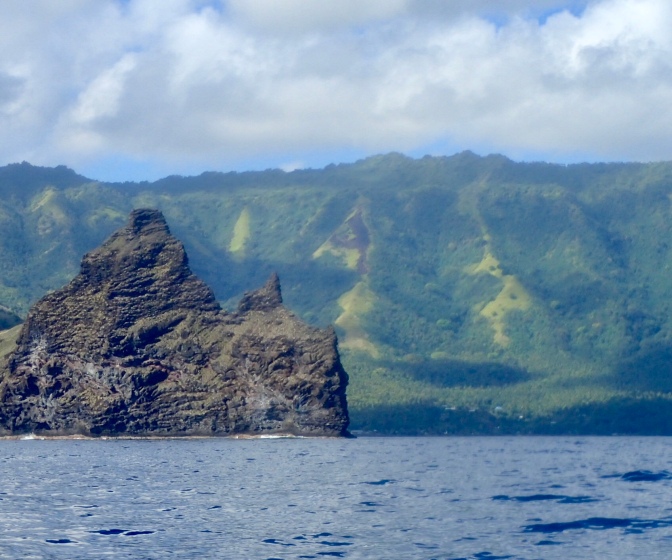 The ever present trade wind cloud brings torrential tropical rain most afternoons that pours down the mountains in lively waterfalls and rivers. 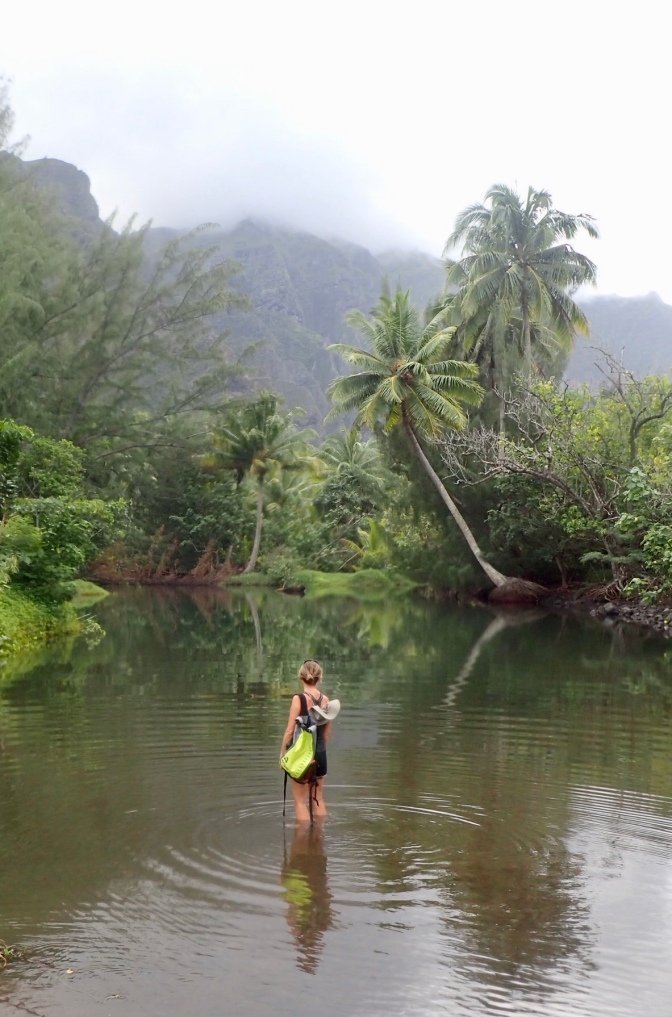 The water was green around each island due to the microscopic phytoplankton. But it was rich with life and we saw manta and eagle rays swimming round the boat in the bays and bizarre ‘witches hat’ coral formations during our diving explorations.

The islands are staggeringly beautiful, but oppressive and the heat, impenetrable jungle and mountains seem to squeeze you small. 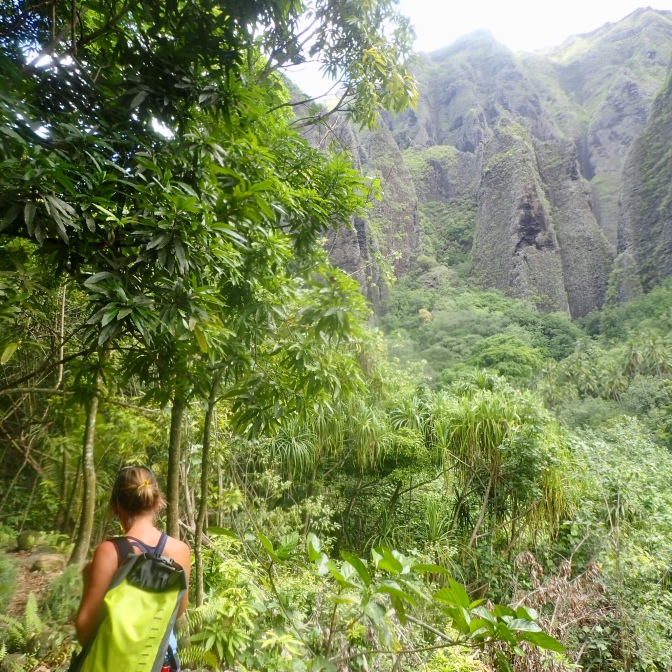 And then there are the infuriating ‘no-see-um’ insects who leave a very itchy bite, but you can’t hear or see them. At its worst I had well over 100 bites – Paul had none.

With a 90-day visa for the whole of French Polynesia we restricted our three week visit to two islands in the leeward group visiting Taihoae Bay, Anaho Bay and Taioa Bay (Daniels Bay) in Niku Hiva and then day sailing to Hakahau Bay in Ua Pou.

Our five pick of the bunch experiences …

1 Cannibalism was rife … as recently as the late 20th century!

It was shocking – and the remains didn’t look that old.

I deeply pity any poor sailor who arrived here by accident back in the day. Though the last cannabilism rumour was as recent as 2011 … ! 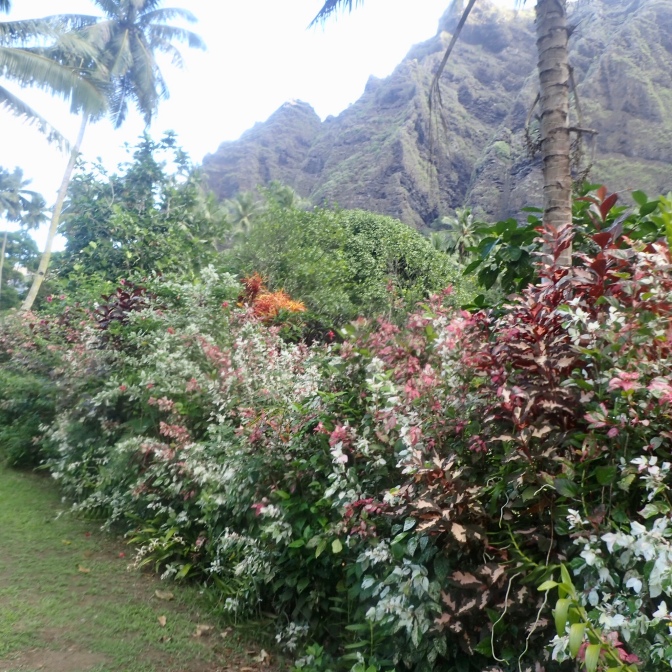 We followed an old royal path inland where the jungle eventually closed in over our heads. 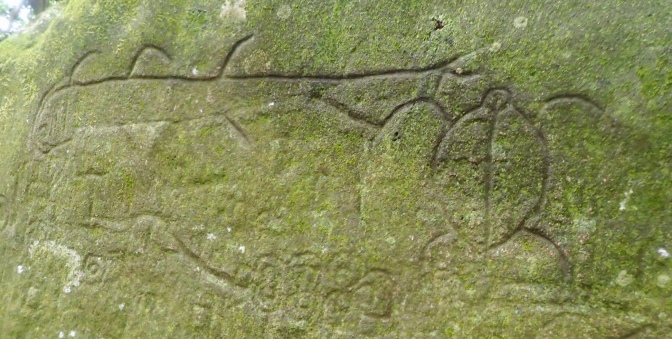 Every so often we’d see a fruit tree with a name plaque nailed to the trunk indicating the owner of that tree.

Orchids hung from moss covered branches, Hibiscus trees dropped flowers on our path and Frangipani and Ylang Ylang trees hung their heavy perfume in the air. 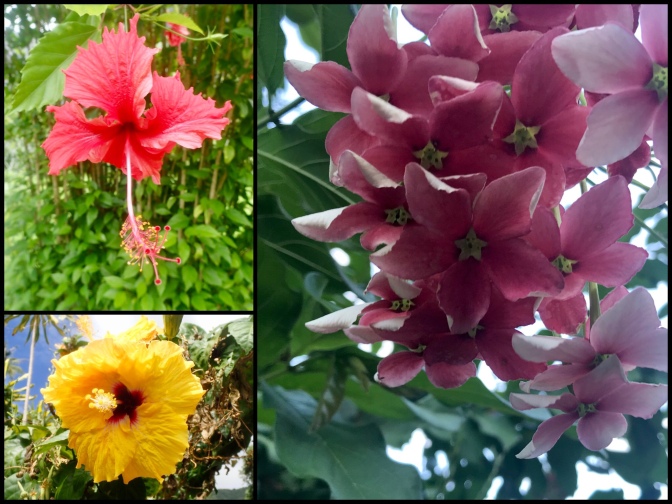 Tikis were everywhere. These are stone carvings of people, which are said to embody their spirit. Many are carved reproductions of originals. 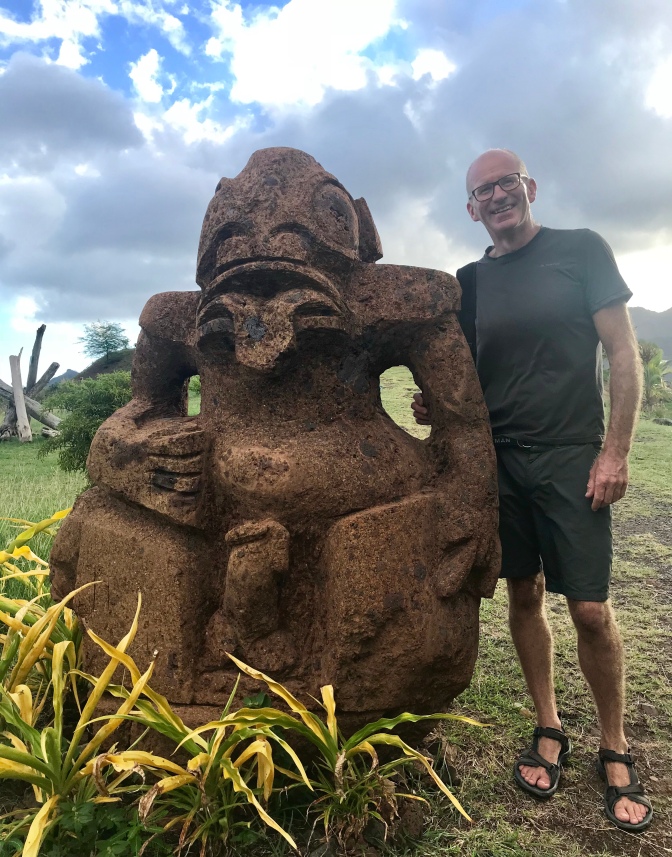 But there were still plenty of old crumbling tikis that had an aura about them.

Many people had striking tattoos based on ancestral designs – including across their faces.

And both men and women wore flowers behind their ears as everyday wear! Right side ‘available for dating’ left side ‘spoken for’. Even when playing basketball or pétanque, their favourite game!

The French connection is strong. As well as being the spoken language, alongside the local Marquesan language, they sold freshly baked baguettes, croissants and pan au chocolat in the boulangerie!

There were no bars or pubs and drinking alcohol didn’t seem to be of interest. No-one rushed, but everyone was peacefully occupied with sport or daily life tasks. We saw lots of kids on modern versions of traditional outrigger canoes; teenagers played music under trees; ladies took exercise classes in the open air village hall.

Nature provides all they need here and there is no big effort to sell things and make money. Some old rope which Paul gave a delighted local man was valued more highly than money.

There was no rubbish on the streets and pristine recycling facilities.

The occasional piglet was advertised outside the grocery shop.

Fences were all natural; dried tree lichen or rows of coconut shells. 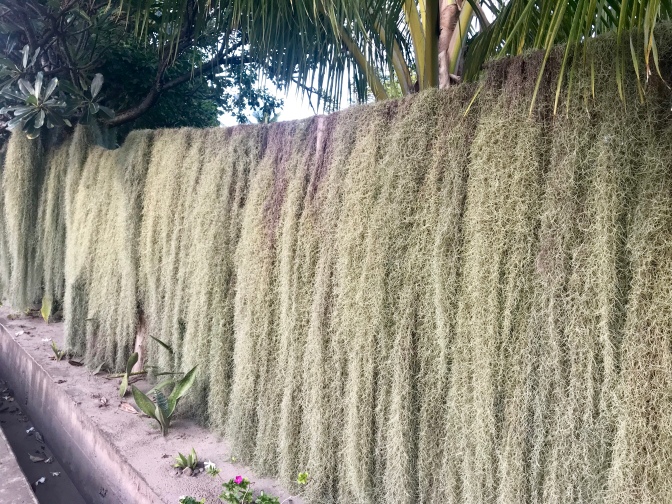 And although there were quite a few pick up trucks most homes had a brown pony tied up in the garden.

Most dogs were tied up too – they were used for hunting. The malnourished puppies who were fed on bananas ran free.

We found bountiful, fresh, mountain spring water. Untreated and available to help yourself from straight from tap. It tasted delicious and we filled up every container we had on board.

You could stand in any one spot, look around and count at least 20.

European diseases caused a massive human population decline and domesticated chickens escaped into the jungle – and survived. They lay their eggs in the bushes where no one can find them, apart from the dogs. And they had a chicken baby boom!

When we asked about the chickens we were told “You want one? Help yourself.”

The same went for the goats and pigs. The large goat population (wisely) kept to steep volcanic mountainsides, while the wild boar ran free in the jungle. 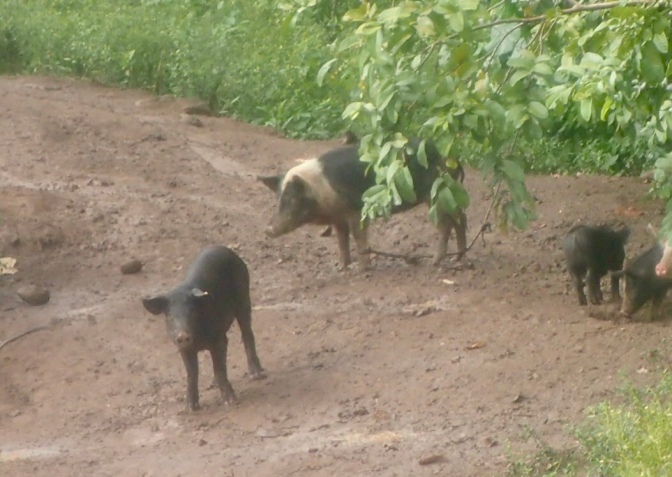 Paul was asked if he wanted to go goat hunting. After the banana incident I had a terrible vision of him returning with a dead goat in the dinghy.

Worse still, the last cannibalism rumour was a tourist who went goat hunting! 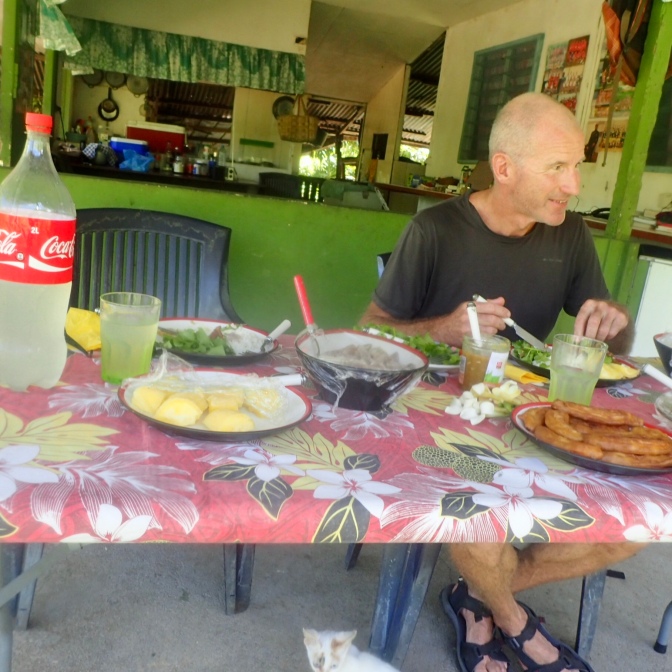 After being given flowers to put behind our ears we were seated on a veranda looking over the mountain, jungle and garden. Kittens sat at our feet. It was a simple pleasure to sit at a stationary table and have food served to us. It felt like visiting relatives.

Paul enjoyed wild chicken, which he had been craving for months, while I had the local signature dish ‘Poisson Cru’ – raw tuna ‘cooked’ in lime, with coconut milk and onion. It came with hot, crispy sweet banana fritters; boiled cassava manioc (like potato), rice, a large dish of watercress and a tamarind and garlic dressing served in a recycled French jam jar. It couldn’t have been fresher or more delicious.

It was all washed down with ice cold, fresh lime juice and followed by wedges of sweet, dribbly pamplemousse. All for a modest £7 each.

As we left we were handed a goody bag of flowers, star fruit, grapefruit, watercress and two big branches of chillis pulled off the garden plant.

Popping to the shops … Marquesa-style

Despite being in such a fertile land of plenty there was very little fruit, salad or vegetables to buy.

In the small stores we found a few onions, garlic and soft potato’s. One had a cucumber, another had some overpriced imported apples and leeks. But all around us were fruit trees heavily laden with pamplemousse , breadfruit, mangoes (not yet in season grrrrrr), bananas and limes. It seemed people either grew their own produce, or they went out and picked it.

After trying to buy a cucumber from a shop fridge and being told I couldn’t because it was reserved for the restaurant we heard about a small holding in a neighbouring valley.

If we wanted fresh food it was clear we would need to make an expedition!

So – our trip to ‘the supermarket’ went like this …

1. We rowed the dinghy to a deserted beach near our anchorage in Anaho Bay. Landing involved negotiating surf waves big enough to flip the boat. Thankfully we managed to keep mostly dry, dragged the dinghy up the beach and tied it to a palm tree 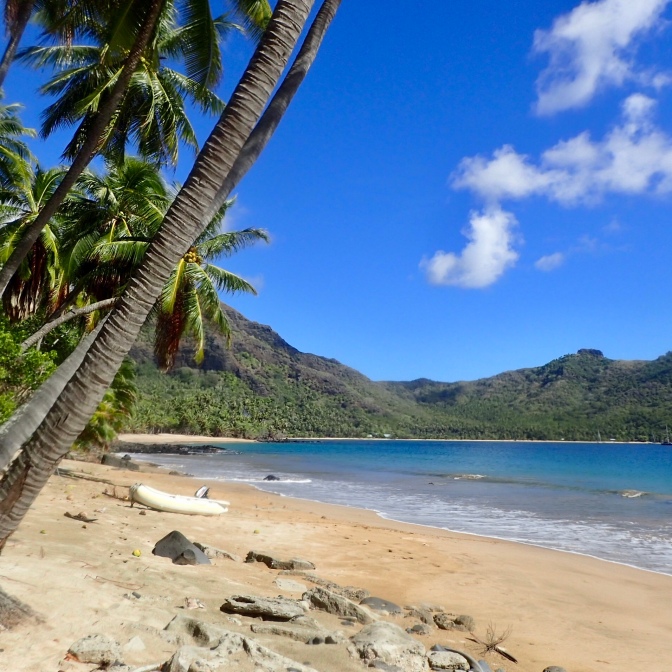 2. We walked along a rough jungle horse track lined with giant yukka plants

3. We found a small holding in a fertile valley – we shouted but it was deserted apart from a few tied up ponies 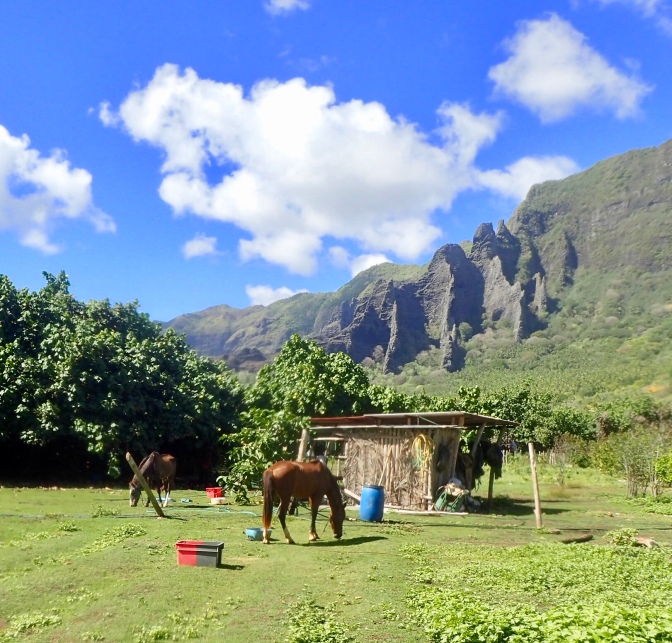 4. We walked on further to find a large deserted beach with reef shark in the surf.

5. We walked back to the farm to hear music!

We tracked the source and found a neanderthal looking man playing with an iPod who told us, in French, that the farmer had ridden into town and we should return tomorrow

6. Repeating steps 1 and 2 we returned the next day and spent an hour looking and waiting for the farmer. 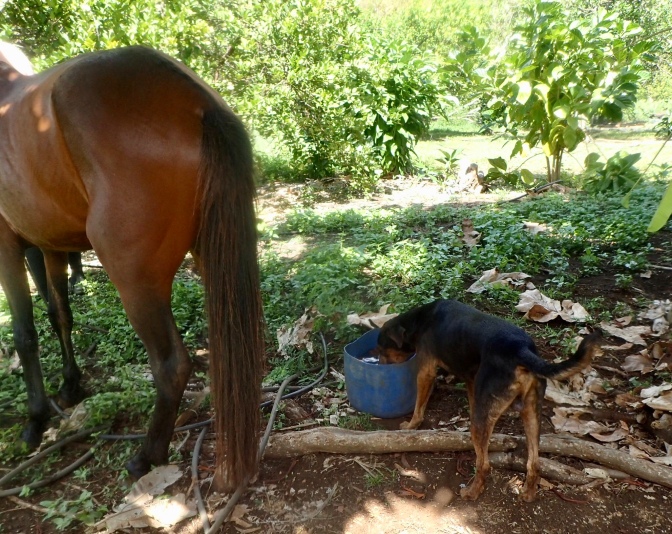 7. We eventually befriended, and followed, a clever dog who led us to where the farmer was pruning! 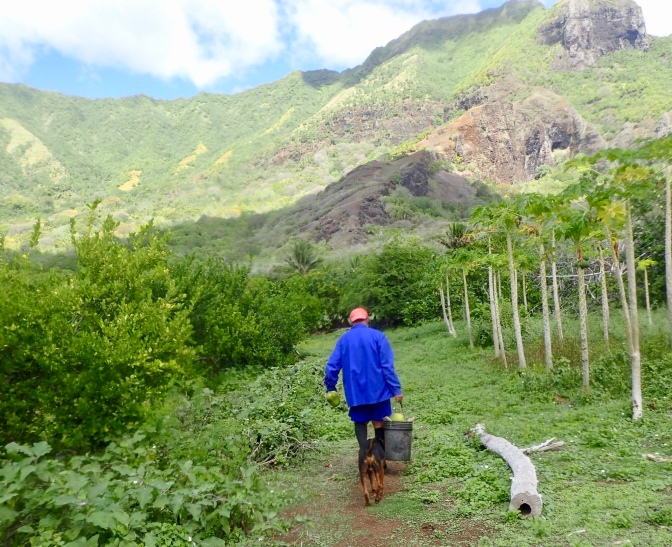 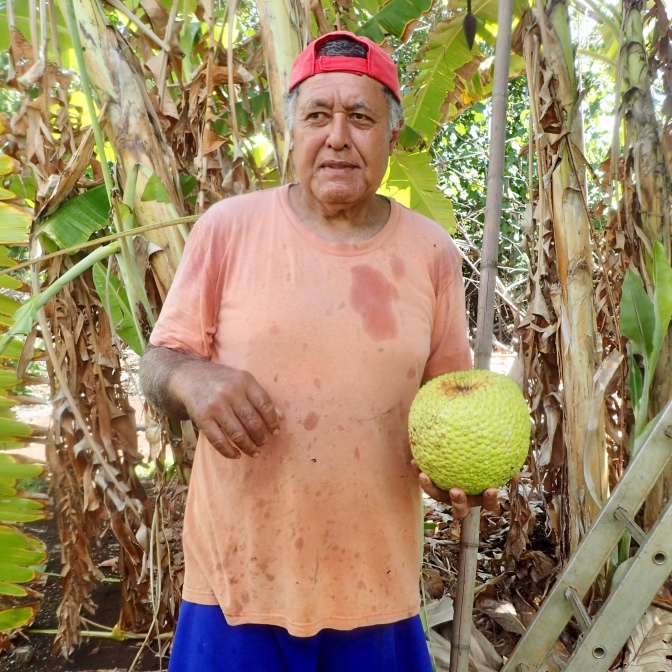 While chatting about Brexit (!) and football we were shown around his semi wild orchard interspersed with planting. 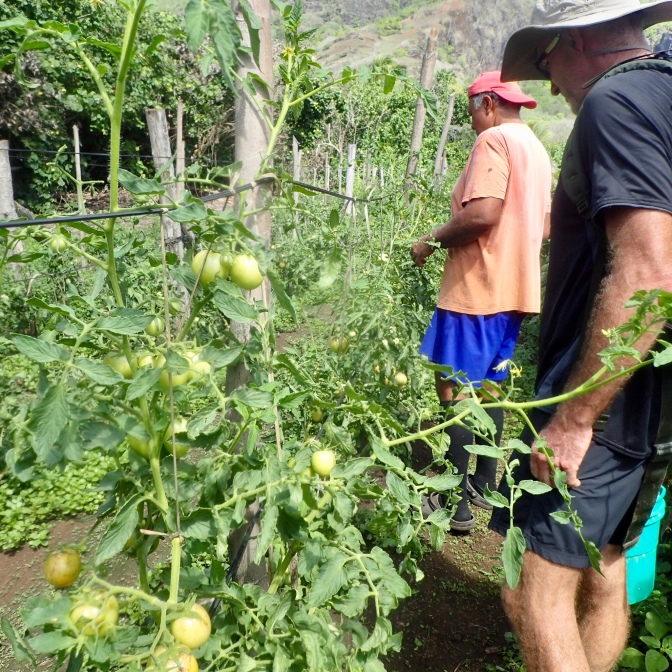 It was both natural and cultivated and heavy with produce. We could pick and choose what we wanted under his expert eye and filled our rucksacks with tomatoes, melons, pamplemousse (like grapefruit), cucumbers, parsley, rosemary, breadfruit, star fruit and aubergines. 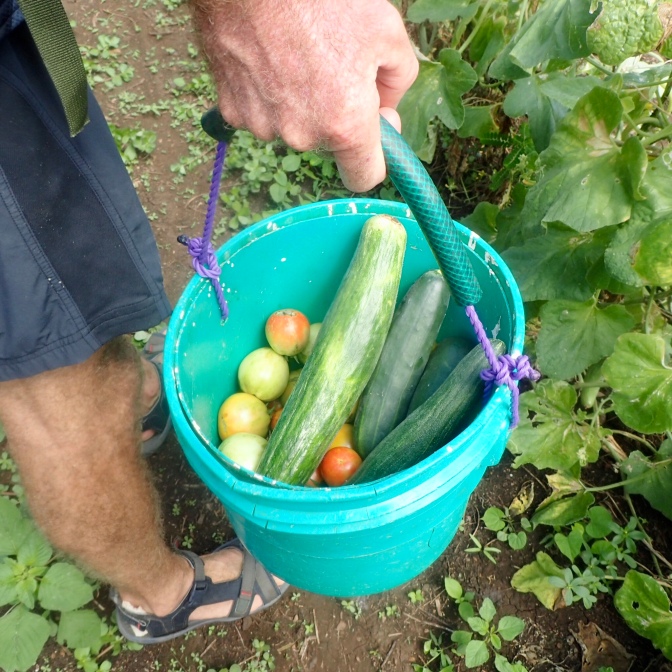 But it wasn’t over!

9. We carried our treasures back along the jungle path, hauled it into the dinghy and realised the surf was running high. 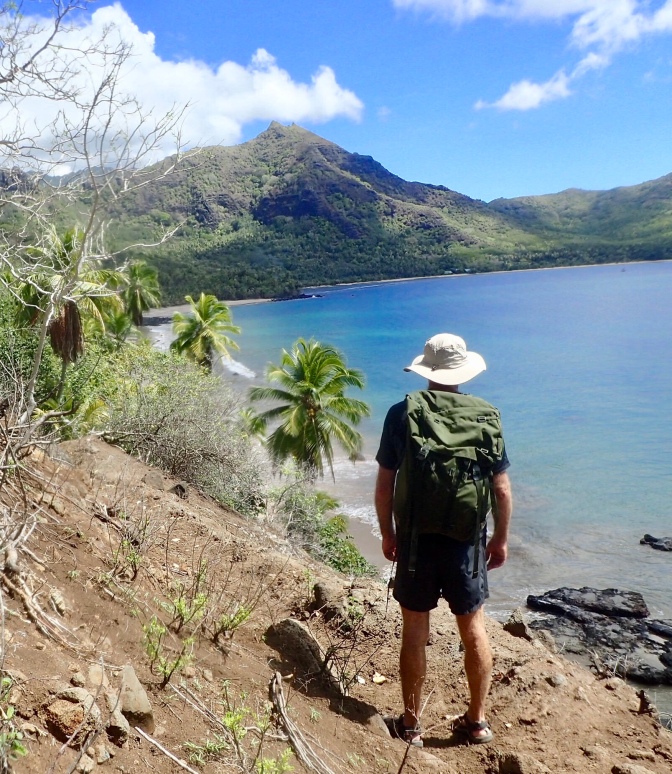 I had to swim through the surf to meet Paul in deeper water, while he rowed furiously through the waves in a bid not to roll the dinghy and lose all our hard earnt goodies.

It was a tough shop. It took nearly six hours in total. But every fresh organic bite was worth it. 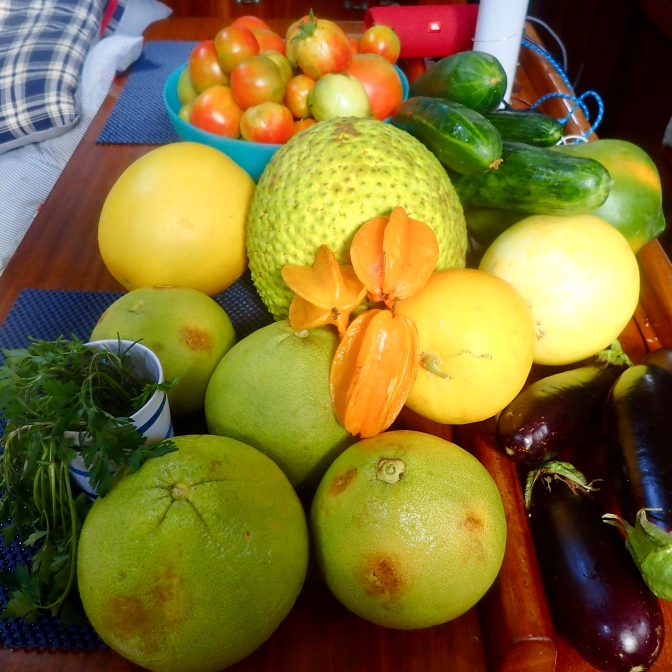 Perry turned out to be ring ‘worm’!

The hospital in Niku Hiva was set at the foot of a mountain, surrounded by flower and fruit trees. Practically deserted I was immediately seen by a cheery nurse with a flower behind her left ear.

I was weighed (4kg lost, Paul’s lost 8kg), blood pressure and temperature taken. She took notes of the problem and personally walked me through scented gardens to see a young male French doctor who immediately diagnosed the fungal infection. He wrote me a prescription and the cost was £18 – an experience worth every penny.

Sailing to the Tuamato Archipelago

We weighed anchor from Ou Pou on Friday 31 May and it took us four frustrating days to reach the Tuamotas.

The first 48 hours was one of our worst passages. Squall after squall, day and night, brought torrential rain and wind gusting up to 30 knots. These intense squalls were followed by light, confused winds, countless sail adjustments and general exhaustion.

We’ve sailed the majority of our longer ocean passages in typical trade wind conditions where winds may be strong but are consistent. Unsettled squally weather demands constant attention to the sails and self steering.

On top of all that a small yacht like Baggy is difficult to keep dry, so attention to life below decks demands extra care. The saloon can quickly become a steam cooker with windows shut, tropical heat and wet clothes, leaks and puddles to deal with!

Two consecutive cloudy days also meant the solar panel couldn’t generate enough power to replenish the nights usage. And this meant no fridge. So – for the first time in ten months – we had to start the engine in order to chill the happy hour soft drinks … not that we were feeling all that happy!

Because of the weather we were keen to make the earliest, safest landfall we could and anchored in Raroia Atoll lagoon on Tuesday 4 June – after negotiating a fierce (and potentially dangerous) tidal coral pass.

At the time of posting this we have since made our way to Makemo and Fakarava Atolls … but that’s another whole new adventure.

As always, you can see where we are on our trusty old Yellow Brick tracker. 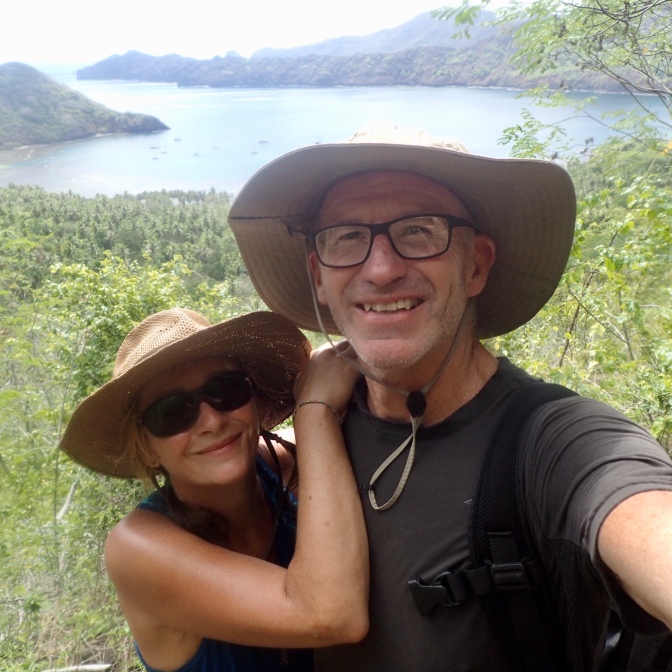 Till the next blog … Bonne Journee!