I could have sworn I’d put the right ones on, but five hours into our three day sail from Grenada to Bonaire it was clear I had DEFINITELY put the wrong ones on.

And that was just tough. It was only Paul and I on board and we needed to keep to the three hour watch rota.

My first night watch on this trip was therefore extremely grim.

I had an ear infection from a dodgy swimming pool in Grenada and every 10 minutes I’d throw up over the side, feel better for 10 minutes and repeat.

It wasn’t that rough but it was gusting 20 knots, we were rolling and it was dark. And it had been a month since we’d been in big seas.

Paul’s strategy was, as normal, to eat as much as possible! He tucked into roast potatoes and cauliflower cheese topped with corned beef, followed by coffee and banana bread. A few hours later he had cereal, fried egg on toast with hot sauce, chocolate and two cups of tea. Just saying.

Thankfully I was distracted on my watch by a large frigate bird which had hitched a ride on the solar panel … and three huge Venezuelan cargo carriers.

According to the chart plotter one was heading straight for us and the others were forming a pincer movement.

We were keeping well clear of Venezuela and were purposefully sailing over 50 nautical miles out from the cluster of islands on our route. And now, in my befuddled sea sick head, we were being surrounded by Venezuelan pirates.

Mercifully Paul soon got up, told me I read too much, cleaned up my mess and took over the watch.

The next day I found the correct legs and the world was a much friendlier place.

We were creaming along with 10-20 knots of breeze. We made friends with a masked booby called Brian, who kept an eye on us for most of the voyage …. and then I saw a whale!

Boobies and frigates began gathering overhead, THEN the flying fish went beserk. THEN the dolphins arrived … and THEN a huge whale head reared out of the ocean right beside Baggy and crashed back down again.

It was a feeding frenzy and we were sailing straight through the centre of it.

Paul slept through it all ….

The rest of the passage went without incident and eventually it was – “land ho” – we had arrived at the tropical island of Bonaire on Monday 14 January. We radioed the marina office and picked up a mooring buoy just off the lively town of Kralendijk.

We hadn’t even stepped foot ashore but we already knew we liked this place. No anchoring anywhere and strict environmental protection laws to protect the fragile coral reefs surrounding the island.

Bonaire is just fifty miles north of Venezuela and is one of the Dutch ABC Islands – Aruba, Bonaire and Curaçao.

Twelve things we LOVED about Bonaire

4 Over 90 scuba diving sites – accessible by boat and shore – thanks to the coral reef surrounding the island and neighbouring Klein Bonaire.

5 Pink Flamingoes – 1000s of them! Though sadly in crisis – adults are currently being shot by Venezuelans for food and the influx of sargassum weed is killing fish nurseries = flamingo food.

8 It felt safe and there was zero hassle. We could row ashore to the free, local sailing club dinghy dock and there was no need to lock it up. AND there was a bar right by the dock for sundowners.

9 While we waited for my ear to mend we hired mountain bikes to explore the island and visited the heart warming 700 strong donkey sanctuary.

These shy and friendly animals had sadly been left to fend for themselves as modern transport took over the island. They didn’t fare well. Thankfully lovely people rescued them and they are now all enjoying a safe, free life.

10 We hired a Jeep (called B6161) to drive round the island and visited the 5,643 hectare Washington Slagbaai National Park to climb a volcano hill.

11 We rocked out at the Guitar Hero’s night at the famous Little Havana club in town!

12 BUT BEST OF ALL – after patiently dosing myself with antibiotic ear drops for a week -we EVENTUALLY dived the pristine, gorgeous reefs of the Bonaire National Marine Park.

This unique ecosystem has been carefully protected for more than 37 years and claims to be one of the top diving destinations of the world. And we understand why! 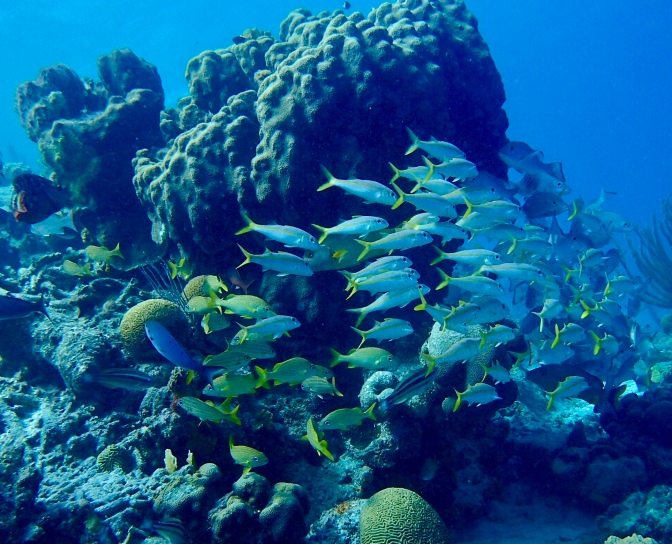 1 For starters Baggy bagged a brill Bonaire buoy! We were moored just off the reef with a dive site right under the boat. Perfect for spotting moray eels on night dives.

2 We were given a free map showing where all the dive sites were and bought a book with all the information about them.

3 Every site was accessible from the shore or by boat. Dedicated moorings could be used for two hours, on a first come, first served basis. So, we took Baloo to the nearby sites and motored Baggy to the others and dived off the back of her.

4 Typical mornings started with banana pancakes whilst reviewing the weather, map and book and deciding where to go.

5 We’d put our dive kit together and (if taking Baggy) secure Baloo to our $10/night town harbour mooring to keep it bagged for when we ‘returned home‘.

6 We’d motor to a dive mooring and either a) dive it b) find it taken or c) decide to go to a different one because it was too windy, too much current or a long fin out to the reef drop off.

EVENTUALLY we’d moor up, re-read the book, plan our dive, kit up and dive in!

The biggest fish we saw were tarpon. We saw no turtles, sharks or rays. But – there was a huge variety of reef fish, morays and coral.

7 After surfacing I would de-rig the kit, put things out to dry and make lunch. Paul would refill our bottles with the compressor we kept on deck for the trip.

8 After lunch we’d move to a new site and do it all again!

Benefits? No dive schools – no time restrictions – we chose our own site, depth and dive profile – we had the dive sites all to ourselves- no waiting for fills – food and drink on tap – our own heads and shower – totally free (apart from some fuel) – complete independence in our own time! = Baggy Brilliant

9 At the end of the day I showered with the regulators and computers to save water and Paul refilled the tanks for the next day!

1 Paul’s shortie wet suit blew off the boat one windy night … never to be seen again!

2 One of Paul’s fins blew off the boat one windy day … never to be seen again!

3 One of my regulator first stages blew an o-ring … which jammed the high pressure port … which meant I couldn’t see how much air was in my tank! Thankfully this was speedily fixed for just $10 at the nearest dive shop.

All good things come to an end and on Saturday 26 January we said our goodbyes to Bonaire and sailed the 110 nautical mile, sixteen hour passage to Aruba.

Baggy literally bolted out of Bonaire after 12 days on a mooring buoy.

Like a dog off the lead she sailed a very fast passage in boisterous trade wind conditions gusting 25 knots in a moderate sea state.

We couldn’t slow her down. We started with twin headsails and ended up with just a quarter of the genoa … and despite this we were still making seven knots. It meant we arrived much earlier than expected and had to set anchor in the dark till customs and immigration made it into work to see us the next morning!

We skipped visiting Curaçao after hearing about less than ideal mooring options. Though Aruba’s clearing in point left a lot to be desired.

But, more importantly, we were in the head space of planning for our big five day sail to Panama and focused on our weather window for that. It’s renowned for rough seas.

A bit about Aruba

Aruba’s strapline is ‘One Happy island’ and described as Miami Caribbean. It’s set up for cruise ship tourists. In fact, the Disney Wonder Cruise Ship was our new neighbour – it’s ships horn played ‘If you wish upon a star’!

The food and beer is expensive, but – after 15 days off the grid – we treated ourselves to a few days in Renaissance Marina, which included using all the local fancy hotel facilities for just $36 night. So we did … including power boating to its private island 🌴🤩

On Thursday 31 January we set sail for Panama, our longest voyage yet, with just the two of us. We estimate it will take around five days to cover 650 nautical miles.

There is a section of the voyage … around the middle … just off the Colombian coast … which is notorious for strong wind and big seas. Experienced sailors may therefore have noted that we’ve added extra distance on to sail around this patch of bad weather!

Taking this into account we’ve chosen to leave Aruba earlier than planned as strong winds are forecast and we can’t afford the time to wait in Aruba for a better weather window.

But we are ready:

– storm condition meals have been planned and made easy access

– we are topped up with water, fuel and gas

– Transatlantic Bagheteer, Paddy, is sending weather updates to our sat phone so we can take action to sail further out from the bad weather zone if we need to.

And, all being well, we should arrive in Linton Bay, Panama (a remote marina next to a jungle!) around late Monday 4 February/early Tuesday 5 February. Just six months since leaving the UK!

Here we will check in with Customs and the Port Captain for a cruising permit, before catching a bus to Portobello to clear in with immigration.

THEN we plan to sail to the San Blas Islands.

But more of that to follow … we need to get ourselves safely to Panama first!

Here’s hoping I put the right legs on first this time!

5 thoughts on “Floating on Bonaire”