It was 11pm and pitch black. We were soaked after the third wave had crashed over the side and were surfing through a channel between Ilheu dos Passaros and Ponta Joao Ribeiro off Sao Vincente, Cape Verde in a 30 knot gust.

We could just see rock on either side of us and dazzling island lights ahead of us. Our tablet had got wet and the chart we’d downloaded for this part of the voyage wouldn’t open. Our only option was to remember the details we’d briefly seen before it conked out, use our torch and carefully negotiate ourselves to where we thought the anchorage was – avoiding the hazardous wrecks.

The three Bagheteers (Paul, Sally and Mark) had slipped Baggy’s lines in South Tenerife on Monday 5 November and we anchored off the island of Sao Vincente, Cape Verde late Sunday 11 November.

And … more swell …
The six and a half day passage had been a fast, challenging, rock and rolling, sleep deprived ride. A dramatic arrival wasn’t what we had in mind.

BUT – we made it – and the beers we all had very late that night were the loveliest beers we had ever drunk.

AND  – even though our cabin had been soaked by a wave through an open window we SLEPT in the saloon. It was the finest cotton cloud STATIONARY bed in heaven!

Our watch system was three hours on and three hours off – each taking it in turns to spend an hour with each other and an hour alone. It helped the night watches go faster, but sleep had to be taken in broken segments.

With the extreme boat motion we were lucky to snatch any more than three hours a night and another two to three during the day, at the very most. We were getting used to ‘sleeping’ braced, being catapulted across the cushions or waking upside down forgetting where you were.

Sample watch hand over briefs (no names given to protect the innocent):

I’ve put the toilet door back on – no-one’s been sick – the moon didn’t come out last night – we’re completely alone, we’ve seen no other ships – it’s mash and tinned peas or nothing.

I’ve made a new toilet door handle out of bungee – that sound of an electronic person saying the lottery numbers is the genoa sheet car – we’re going past the Western Sahara.

The heads are still back filling – Pete’s turned into a flying fish – have a good watch … I’ll be checking the course and speed from my cabin looking at Navionics on my tablet.

I found a cabbage in the locker with living things in it, I’ve left it on the cooker for you – we need to eat ALL the bananas TODAY – I’ll finish the curry for breakfast – did you turn the eggs upside down?

My water bottle’s leaked in the middle of the bed –  who turned the diesel powered Eberspacher heater on? – you’re the lightest, climb up the mast and look for land … and don’t come down till you see it

1 We’re in the Tropics! We crossed the Tropic of Cancer approximately half way into the passage

2 Flying fish Baggy played ‘cat and mouse’ with big shoals (flocks?!) of flying fish which leapt out of the way of her bow as this ‘yacht-cat-whale’ type creature bounded towards them. They kept landing in the boat … and Marks lap! We were finding them for days!

3 Baggy Bird Taxis Pete the European Storm Petrel hitched a ride in the cockpit in the middle of the third night. He hunkered down in the corner for a little sleep, but when we last checked he’d been replaced by a flying fish who had face planted into Pete’s poo. 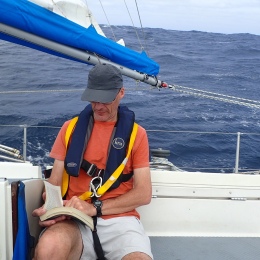 Mark reading Blood Line
4 Baggy Book Club When Mowgli was steering and we were rolling in the swell all we could do was sleep, eat and read. Between us we finished six books!

5 Happy Hour Every day at 6pm we met on deck for (non alcoholic) drinks and nibbles. Popcorn was a big success. The aspirational poppadum and mint yoghurt idea came to a flying finish … but full marks to the Captain for attempting to cook with scalding oil on a gimbled cooker in a Force 6.

7 Last post The Captain ‘played’ The Last Post on his bugle, on deck, at 11am on 11 November. Someone was rudely awakened …. !!

8 Big Bilge Bail Out Engine oil had oozed into the bilges and mixed with the sea water that had seeped in through the anchor chain compartment … NICE – NOT. 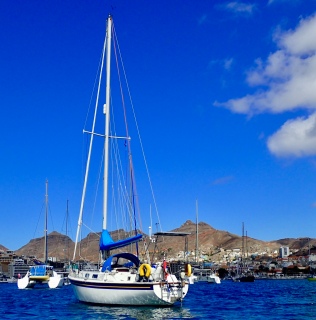 “Mowgli (the wind vane) proved his worth every day. No-one had to touch the wheel for the full passage – though we helped with quick adjustments when hit off course by big waves.

“The fresh to strong north east trade winds created a wave train with 3-4 metre swells for the entire passage. When the boat and the wave train were in perfect harmony we surfed effortlessly along with directional stability and a smooth motion. But this was a never ending objective that was rarely achieved. We just did our best to minimise stress to the crew and the boat, whilst still achieving a good passage time.

“When the wind built to Force 6-7 we snugged down with three reefs in the main and a well furled, poled out genoa. We elected to keep this more conservative rig even when more sail could have been used at times. The net loss in boat speed when considered against comfort on board, and lack of any urgent arrival deadline, was irrelevant. So we tweaked for course but not for boat speed and focused on keeping safe.” 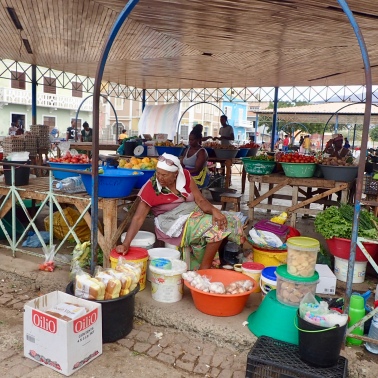 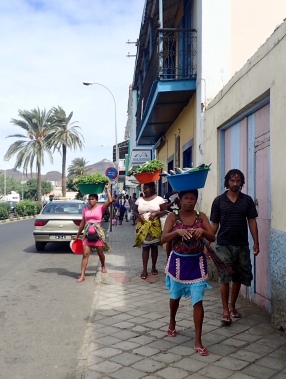 We spent eleven nights in Mindelo, Sao Vincente.  Four nights in Mindelo Marina (described in the pilot book as amongst the finest marinas in the eastern Atlantic) and seven nights at anchor (we were booted out to make way for Arc Rally vessels coming in).

Delivering groceries to the marina

Lovely lettuce – freshly picked
Walking into Mindelo for the first time was an attack of the senses. The place is full of character, colour, music, happiness, fish … and stray dogs who just want to be your best friend. And it’s HOT.  Searing, skin burning HOT.

Baby fish … part of local sea protection art exhibition
Tourism is light touch, mostly from the visiting yachts. And the streets are buzzing. Ladies walk around with wheelbarrows of produce and carry buckets of fish on their heads and the fresh produce is literally pulled from the ground with roots in tact, or plucked from the trees that morning.

Cutting our Wahoo steaks for dinner

One of over 50 fish market ladies 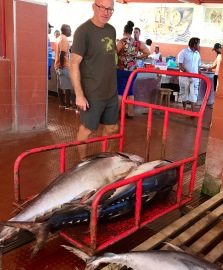 1 Family dinner: We had dinner in someones living room just off a busy road.  It was just us; we were treated liked family and it couldn’t have been more fresh and homely.

Plastic tables were swiftly covered in a damask table cloth and there was no menu.  We were served fish, vegetables, warm bread, rice, chips, beer, coffee with warm milk in china cups and home made lemon pies – all for €10 each. Family members drifted in and out, cakes were made in the back room and babies were brought out and cooed over. Well done Trip Advisor. Though our hostess would have had no idea what Trip Advisor even was! 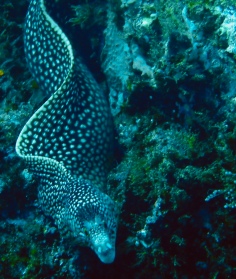 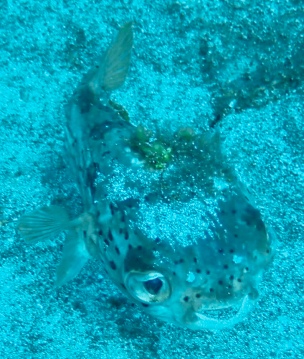 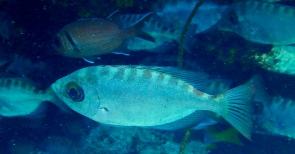 Mindelo Dive Centre
2 Amazing Diving: It’s teeming with life here!  We have turtles swimming past the boat at anchor and also saw nurse shark. Though we noted the dive guides wear gloves and we both came up with stinging hands and tiny cuts. Time to start being more savvy to unknown underwater dangers!

3  Morra Music:  You hear live music everywhere – it’s lilting and story telling and being played in nearly every bar and the beach. 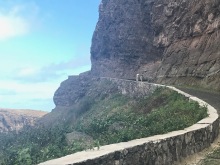 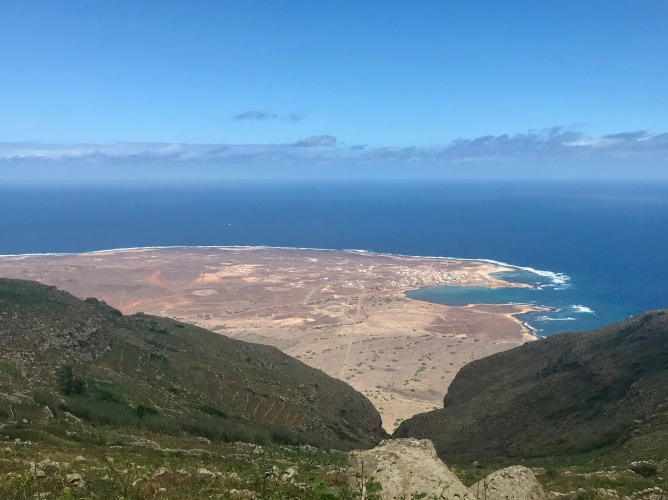 Sao Vincente
4 Monte Verde:  Climbing the highest point of the island we saw that donkeys are still used to work the land.  And we discovered that they burn all their rubbish. because we saw the burn site from the top.  They have no recycling system and still dish out plastic carrier bags and plastic straws.  Despite this the streets are very clean apart from dog muck in the roads and quite a few fish guts!

What next? “Woooa – we’re going to Barbados!”

(Yes – we have been playing the song!)

2,100 transatlantic nautical miles to the Caribbean and our longest passage! The 800 nautical mile Cape Verde passage was a brilliant test … but a sprint in comparison!

We’ve said goodbye to Mark 1 and hello to our original Bagheteer Mark 2 (Mark Padfield, known as Paddy) who is sailing with us on this marathon leg.

Following the north east trade winds and taking advantage of the north equatorial current we hope to make the passage in 18 days or under.

We’ve been busy fine tuning our final preparations … including:

– rigging salt water dispensers in the sinks to conserve tank and bottled water (for hand washing, teeth, washing up)

– downloading a small library’s worth of books

– charging up everything that can be charged

– cleaning the hull and rudder

– patching chafe areas on the mainsail

The list goes on and on … but Baggy and her crew should be ready to leave around 23 November.

Follow us on Yellow Brick and see you all in the land of rum punch in December!

9 thoughts on “Rock and Roll to Cape Verde”