Two new crew members joined The Bagheteers on the crossing from Falmouth to Camaret-sur-Mer, we stumbled upon the cairn destroyers of Camaret and I learnt six more useful things! 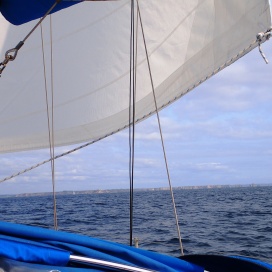 The cliffs on the horizon of Camaret-sur-Mer

Our yacht berth in Camaret

Our friend, Bruce (Brucie), joined us in Falmouth to help us with our crossing to Spain and we departed on Wednesday 22 August, arriving in Camaret-sur-Mer in Brittany around 29 hours later for a pit stop.  We operated a three hours on, three hours off watch system in order to sail through the night. 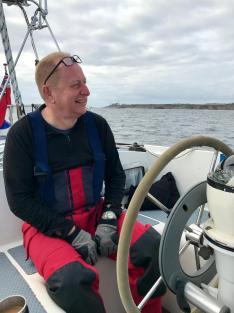 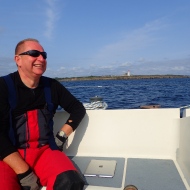 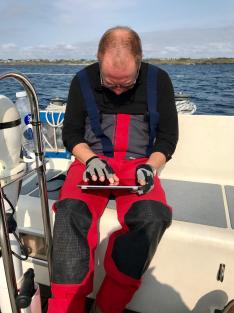 I buddied up with Bruce and the hours flew by sharing adventure yarns, watching the eerie phosphorescence in the water, identifying the night lights of other ships and enjoying the company of dolphins. 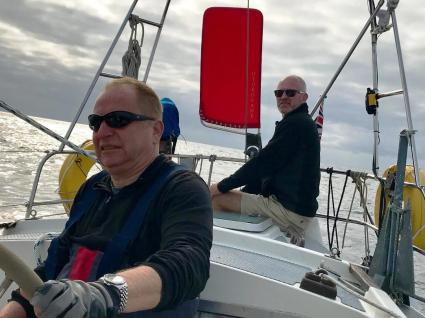 Our second new crew member, Mowgli, quickly became indispensable.  Mowgli is our hydrovane (a large red, rudder based, self-steering system) which uses the wind to steer the boat.  Mowgli kept us on a steady starboard tack for 21 hours with no-one needing to touch the wheel; he didn’t ask for any cups of tea … or answer back (said Paul).

Six more things I have learnt ….

2 Bacon and egg rolls are called bacon and egg banjos (because when the egg  runs down your front you look down, brush it off with a piece of elephant bog roll and hold the bacon and egg ‘banjo’ out of the way with your other hand)

4 The top loading fridge is like a high security prison.  All food items MUST be secured in boxes or bags or bids for escape will be made.  Chickpeas and yoghurt are the worst culprits. Though I can’t understand why as they only end up getting beaten up by the cans in the bottom.

5 While sailing be a useful crew member and observant at all times. DO NOT ask too many questions, justify actions or interrupt. Work in progress!

6 If you upset the Captain (see 5 above) placate him with a piece of elephant bog roll.

…. and before we knew it we had arrived in Camaret and were soon in the pub enjoying our first beers! 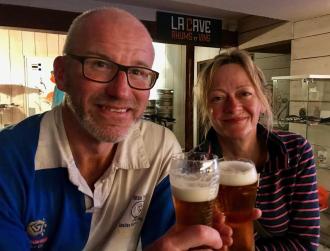 The Cairn Destroyers of Camaret

Walking out of the marina on our first evening we saw a  small section of stony beach covered in mini stone stacks, called cairns locally. I thought they made an eye catching arty impact and the youngsters clearly enjoyed making them.  But …. on our way back from the pub much later that evening a group of irate and angry locals were knocking them all over. On investigation we’d stumbled upon an ongoing environmental issue where people believe these cairns were upsetting the areas ecological balance.

Now, I thought they looked arty and aesthetic , but these artificially constructed clusters of stones have apparently attracted the attention of environmental specialists round the world.  Traditionally used to mark funeral sites, or mountain trails, these piles of stones “affect the natural environment,” a local said. Residents believe that building the cairns is affecting the natural balance of the beach and pushing ‘land art’ to its limit. They are happy for people to build the cairns for photos but then put the stones back.  We later found out that this trend for making cairns is so great that some countries such as Iceland have to make prohibition orders!

Our opinion? Admittedly on a deserted beach it wasn’t good to see a small cairn pile as it did look artificial in a natural setting, but, in a designated area it seems harmless to let people stack a few stones into artistic piles. In a place where we saw zero plastic or rubbish on any of the beaches or headland paths we think that Camaret should think itself lucky if this is the worst of its environmental issues!

Planning our Bay of Biscay crossing and pit stop days

Paul and Bruce spent several hours checking the weather and wind forecasts.  Strong winds associated with an Atlantic weather system were giving south westerly winds gusting to gale force, so we decided to stay in Camaret for a couple of days while the worst of it passed over.  I am SO pleased we did. 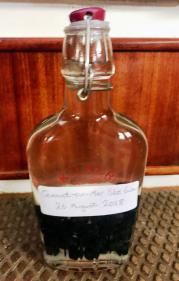 1 A 15-mile hike around the headlands

2 Abseiling down a clay cliff face to a deserted beach

8 Scrumping corn on the cob for lunch

They are going in: Bruce and Paul

Right now … the two scrubbers are cleaning the bottom of the boat ready for our first big crossing. We estimate it will take us three days and all being well we should be in Spain by Thursday lunchtime!  It looks scorchio 😉 😉