We learnt nine very important things on our long passage across Lyme Bay and we won’t be having pancakes again for quite a while.

Day six (Monday 14 August) of our estimated 1095 day adventure was a ten hour passage across Lyme Bay from Portland, Dorset to Brixham, Devon.  It was an opportunity for a proper shake down sail for all three of us (Baggy, Paul and I) to see how we all got on before our bigger passage across the Bay of Biscay next week.

We planned everything out the day before.  The alarm was to be set for 7am to give us time for an early morning run; the passage plan was discussed in detail; clothes and passage meals were all pre-prepared and we had an early night after a tough game of back gammon (it’s a three year tournament and we’re currently Paul 2 – Sally 1 … but that’s just beginners luck).

The next morning we were smugly on top of our game till Paul was spotted looking confused with one deck shoe and one trainer in his hand, and then I looked down to see I’d put on two right socks … !

Moving swiftly on, we pulled ourselves together and were ready to slip by around 1030, the wind blew us nicely off the pontoon and we were soon at Portland Bill and motoring through the inshore passage, timing the arrival for around slack water to avoid the worst of the race.  We had fresh breeze force 4-5 and it was a beautiful sunny day.

It was a long passage – five hours of sailing and five hours of motor sailing when the wind veered. During that time we had just about everything – perfect sailing in gorgeous sunshine listening to music, overcast and windy rocking and rolling and glorious moments of feeling really out in the wilds of nature with no land or other vessels in sight.  We saw a flock of over 100 gulls descend hungrily on a fishing boat and a large pod of dolphins, including a small baby, which circled the boat to say hello before bounding off for new adventures. 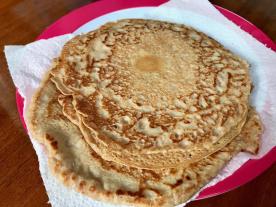 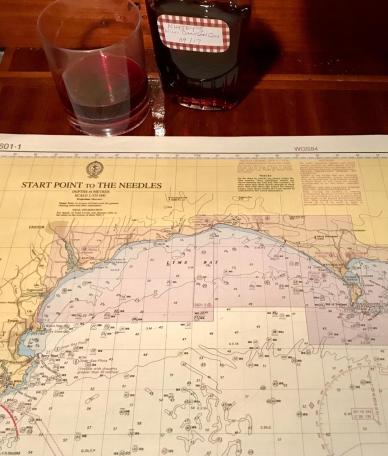 The bright lights of Torquay, Paignton and Brixham were a welcome sight when we arrived in the dark, avoiding lobster pots and trying to differentiate between car lights and the occulting light of the harbour entrance.  We eventually anchored outside of Brixham Harbour off of Fishcombe Cove just after 10pm.  Hot popcorn and a glass of Whitey’s Wild Damson Gin (thanks a million Nick White) polished the day off nicely.

7 The saloon, galley and heads are the ABSOLUTE WORST places to be when the boat pretends to be in a cowboy rodeo.  While in the process of finding your sea legs plan the mission well and get in and out as quickly as possible. I need to get MUCH better at this.

9 And the saddest lesson of all.  Do not put opened flour packets in a Tupperware box which previously had washing powder in it. Persil pancakes anyone?

On a three year sailing circumnavigation! View all posts by baggyroundtheworld

3 thoughts on “A Ten Hour Passage and Persil Pancakes”